With the Treasures of Dordrecht walk you will (re)discover the city in a way you have never done before. Wandering through the historic inner city, you will learn more about Dordrecht's rich history and treasures. To go home richer yourself, you will find beautiful photo opportunities along the route. Create your own treasure chest full of memories and share them with #indordrecht and tag @indordrecht.

P.s. Don't be afraid to get lost, you'll discover Dordrecht at its best.
View the route on the map Spuiboulevard 99
The exploration begins at VVV Dordrecht: the center of information about the city. After browsing around and getting a nice cup of coffee, it's time to explore the city. Arend Maartenshof
The first hidden gem in the historic downtown, is this distinctive courtyard, which you would otherwise quickly pass by. Enter the hofje through the richly decorated Renaissance gate (note the spells). You are now standing in the poor women's court founded in 1625 by Arend Maartenszoon. Arend was married 3 times and due to the idea that he was an illegitimate child, he spent his entire life seeking recognition. He gained a successful career and wealth, but also a bad reputation. As a good deed, he had a court built with 38 cottages around a courtyard with old trees and a well. Here poor women and widows were allowed to live. Immediately to the right, in the Regent's Room, the story is depicted with paintings and there is a portrait gallery of Arend and regents who ran the hofje. Meanwhile, 2 rules of Arend still apply to live there: residents must be of impeccable conduct and they must lovingly take care of the living environment. 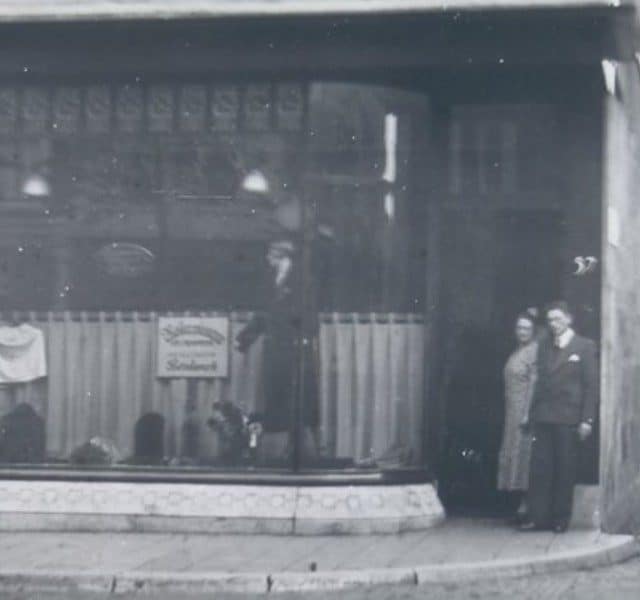 Steegoversloot 189
Continue the route to Steegoversloot 189. Stop for a moment and look down. Have you discovered the stolpersteine yet? Stolpersteine, or stumbling stones, are small, square bronze pebbles. The stones commemorate Jewish residents who were deported to concentration camps during World War II. Stolpersteine are located near the house where the victim last lived. At Steegoversloot 189 these are * Chaim Salomon Haber * Henriette Haber - Jacobs: a Dordrecht Jewish couple. They had a fur store in a corner building on Steegoversloot, which they also proudly called "The Fur House of Trust. On Tuesday, November 10, 1942, Chaim and Henriëtte were arrested and imprisoned. Less than nine days later, Henriëtte was destroyed in Auschwitz. Her husband followed on Feb. 29, somewhere in Central Europe, after years of hard forced labor. 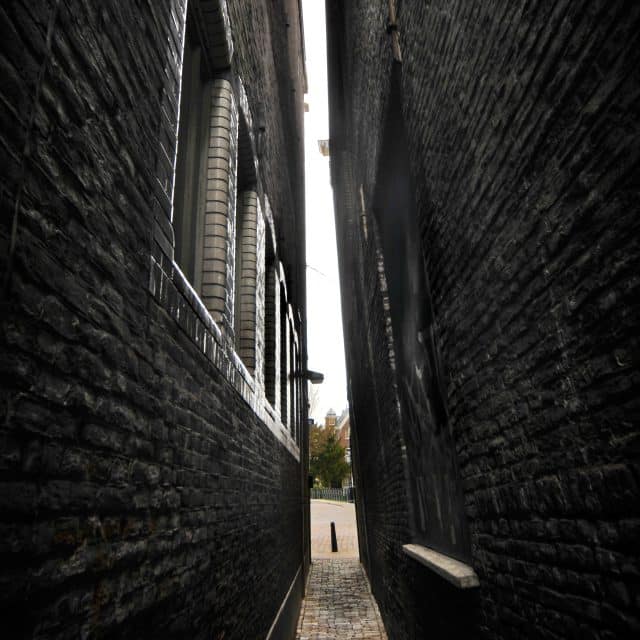 Pocket Carriers Street
The route continues to the Zakkendragersstraat, beware: you will walk past it before you realize it. In fact, this is one of the narrowest streets in Dordrecht. The fact that Dordrecht has traditionally been a real trading city becomes clear with the history of this street. Many ships full of merchandise arrived in Dordrecht, which then had to end up in the right places. Bag carriers, also known as mazelaars in Dordrecht, made sure this happened. They carried the heavy merchandise on their backs and leaned against the wall in this street to take a break. Can you imagine? One of the guild houses was also located in this little street. Feel free to walk through it and imagine yourself back in time. 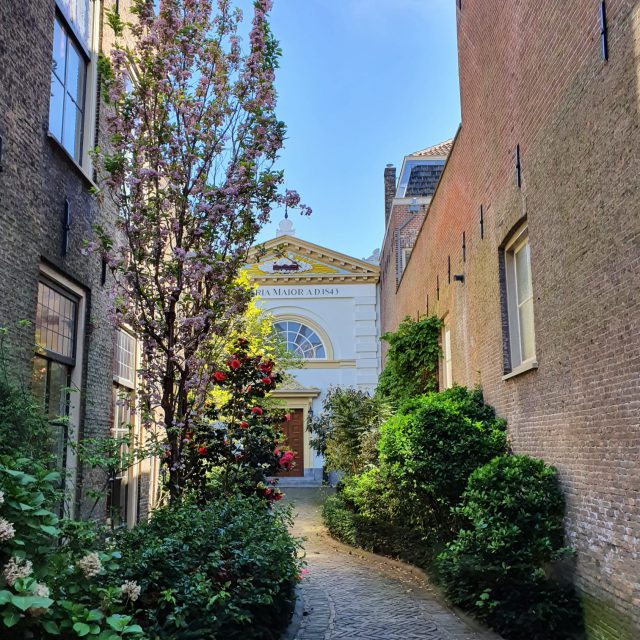 Front Street 120
Hidden between the houses on the Voorstraat, stands this beautiful church building; a reminder of the hidden church that also stood here. With the Reformation in Dordrecht in 1572, Catholicism was outlawed and Catholics met in secret. Later, the government adopted a kind of tolerance policy; churches were allowed to be built, but invisible behind the houses. In 1842, the dilapidated hideaway church was torn down and the current church was built. Nice to know: the path is the only front yard on the Voorstraat. 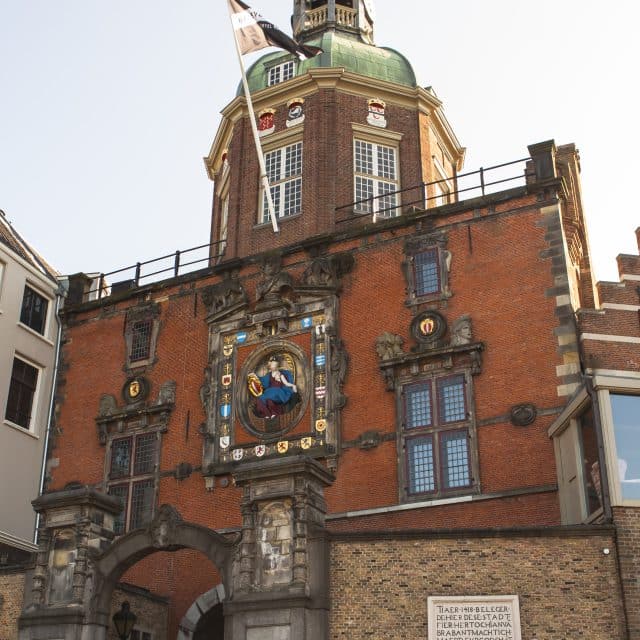 Groothoofdspoort
Stop for a moment in front of the gate and look up, do you see the city arms of Dordrecht held by two griffins? Then walk through this impressive gate and enjoy the magnificent view of the three-river point. This is where the Old Maas, North and Lower Merwede rivers meet. It is the busiest river junction in Europe, yet exudes tranquility. If you have walked under the gate and look up, you will see the Dordrecht city virgin watching over the city. In one hand she holds the coat of arms of Dordrecht and in the other a palm branch. The virgin thus depicts the impregnability of the city. What a beautiful view she has every day. 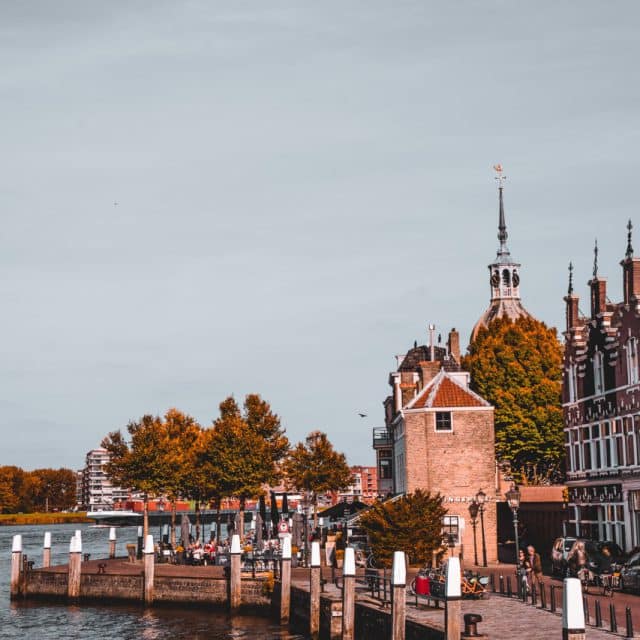 Damiate Bridge
You have arrived at the first photo chat. Looking around, it already speaks for itself why. The Damiate Bridge, which you just crossed, is an 1855 bridge designed by city architect G.N. Itz. The bridge over the mouth of the Wolwevershaven was first made of cast and beaten iron, but had to be rebuilt the same year because of a collapse. Whether you take a picture of the breathtaking view with the Groothoofd gate, or the other way with the bridge is up to you! You can do both, of course: a treasure chest full of memories is never full. Wolwevershaven 21
After the photo opportunity, it is time to move on to the next photo treasure. Continue along the Wolwevershaven. Enjoy all the beautiful monuments as well as the boats in the water. 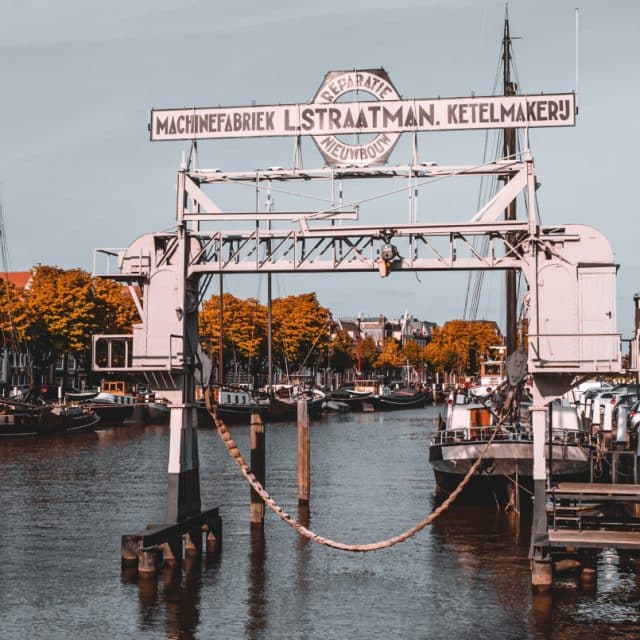 Roo Bridge
From the Roo Bridge you have a view of Schroevendok Straatman. Schroevendok Straatman is a striking national monument from 1928. It belonged to the Machinefabriek L. Straatman Ketelmakerij, which was located on the Kuipershaven from 1902 to 1996. The dock was used to lift ships partially out of the water so that from floating, wooden decks the ship's rudders and propellers could be repaired or replaced. The dock is still in operation, making it a living monument! Knolhaven 4
An atmospheric view from the Potato Market is guaranteed. The warehouses on both sides, in between the quays and rows of boats and the Grote Kerk as the centerpiece of this whole make it a beautiful picture. Lots of history and monuments in one image: Huis van Gijn, De Lange IJzeren Brug, the Grote Kerk... Will you put this photo treasure in your treasure chest full of memories? 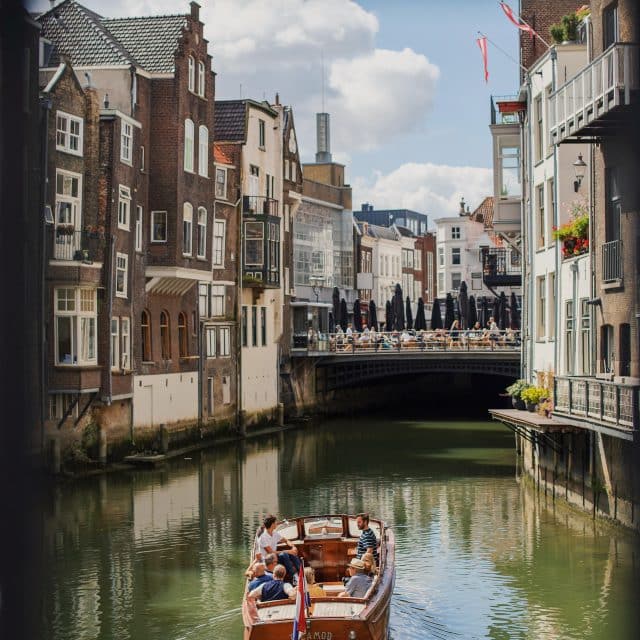 Wine bridge: 'Venice of the north'

Wine Bridge
The Wine Bridge gives a great view of Scheffersplein. The terraces rest on the site of the former toll bridge. The square is lifted, as it were, by a stone vault. The other side of the Wijnbrug shows Dordrecht at its most beautiful. Not for nothing did travelers in the past describe the city as "The Venice of the North" and "galley in the water. Voorstraat 318
Have you already discovered the stolpersteine here? Here is a stone for the Gobits family: Samuel, Rebecca (Gobits - Leeuwin) and Greta. The family had two thriving furniture stores. They lived above the store of the building on the Voorstraat. They died at the same time on November 19, 1943 in Auschwitz. A brother and sister of Greta survived the war. Stop for a moment and imagine how the family lived here. 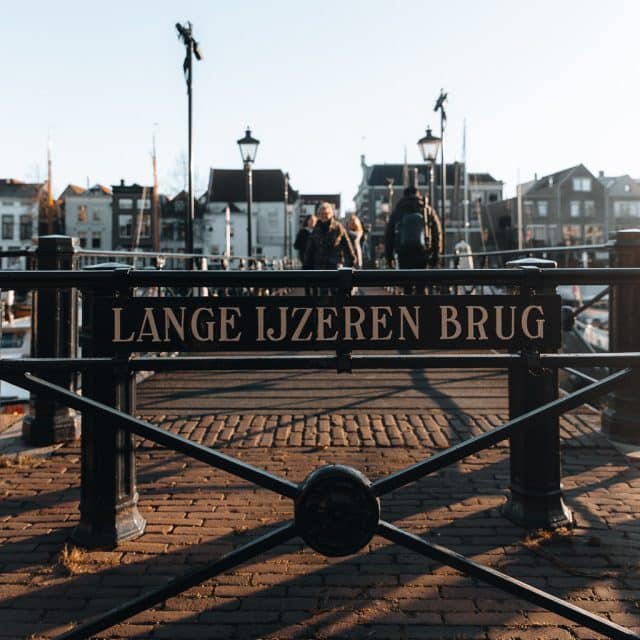 Lange IJzerenbrugstraat
Spread across the New Harbor is the wondrous Long Iron Bridge. The bridge, with a movable center section, replaced a wooden bridge in 1855. The iron successor is a design by city architect Itz. The digging of the New Harbor began in 1409. After completion, lumber merchants settled on Knolhaven Side. On the other side of the bridge, where the quay is also called Nieuwe Haven, warehouses and businesses stood for a long time. Now it is a real residential street. 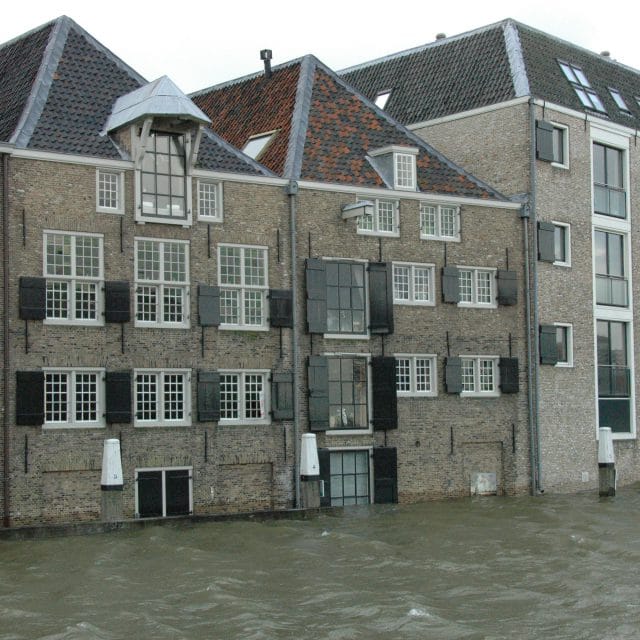 Engelenburg Bridge
The houses near the Engelenburg Bridge make it clear at once: Dordrecht, city on the water. The residents take it for granted that their dwellings sometimes flood during high tide, or they have taken measures to protect their facades. Near the bridge is a level gauge. 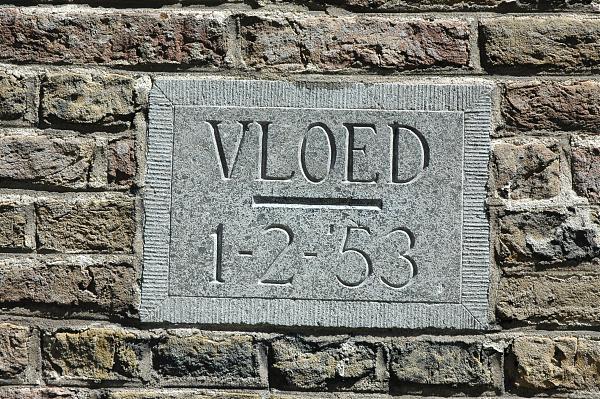 Korte Engelenburgerkade 12
At the end of Korte Engelenburgerkade, an elongated warehouse stands on the right. Do you spot a flood stone between Nuremberg and England? Tip: This is how high the water rose during the 1953 flood disaster. On February 1, 1953, 1835 people lost their lives on the islands of Zeeland and South Holland. A heavy storm combined with spring tides caused the dikes to fail. In Dordrecht, 2 people died and the city escaped The Disaster, but all inner and outer dike areas of the inner city were flooded. The drama that did not occur was due to the efforts of hundreds of Dordrecht residents and a drama in 's Gravendeel. Here a dike broke and part of Hoeksche Waard was flooded, suddenly reducing the pressure on the Dordrecht dikes. 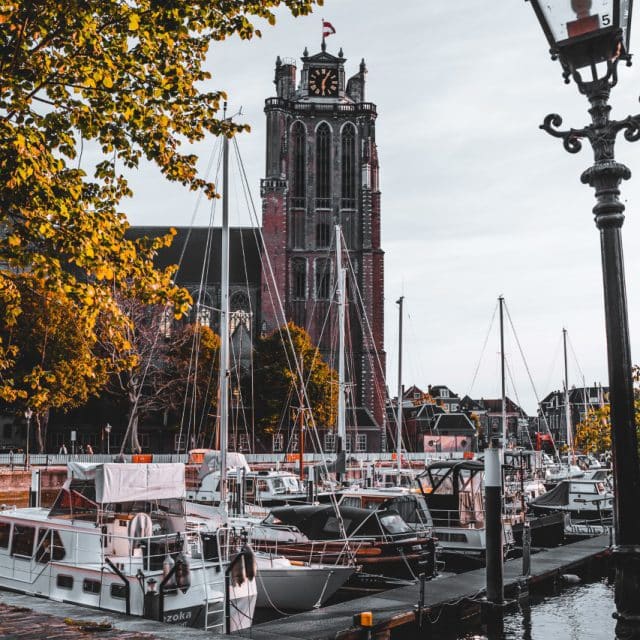 Short Engelenburgerkade
Views of the Zwijndrecht bridge, the Grote Kerk and an inner harbor always make this picture beautiful. Tip: there is an authentic lamppost here that can give the photo just a little extra dimension. 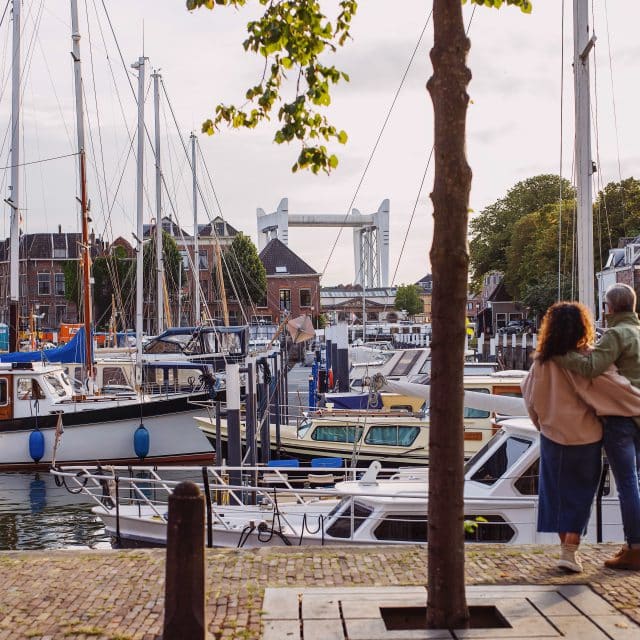 St. Maartensgat 31
Continue via Maartensgat to the Grotekerksbuurt for the next treasure. Be sure not to forget to look around and enjoy the surroundings. 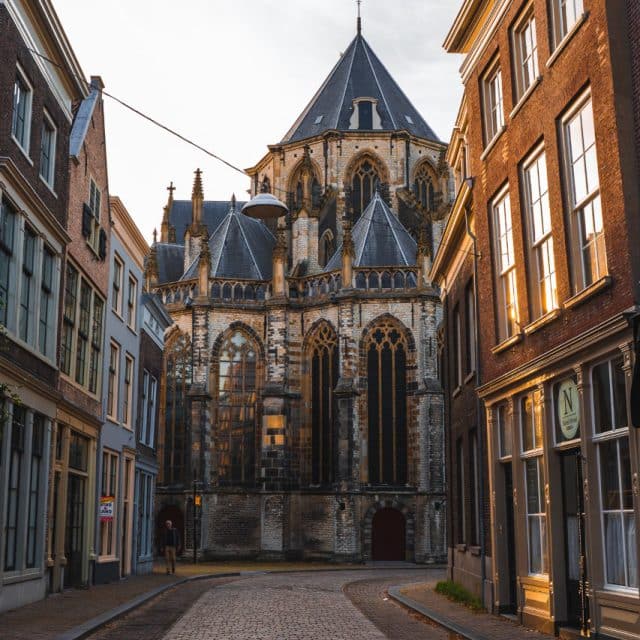 Grotekerksbuurt
The following photo chat is a favorite photo spot in Dordrecht! It has been the backdrop of many films and photographs. Logical, because this picture breathes history and exudes authenticity. Continue on to the next photo treasure. 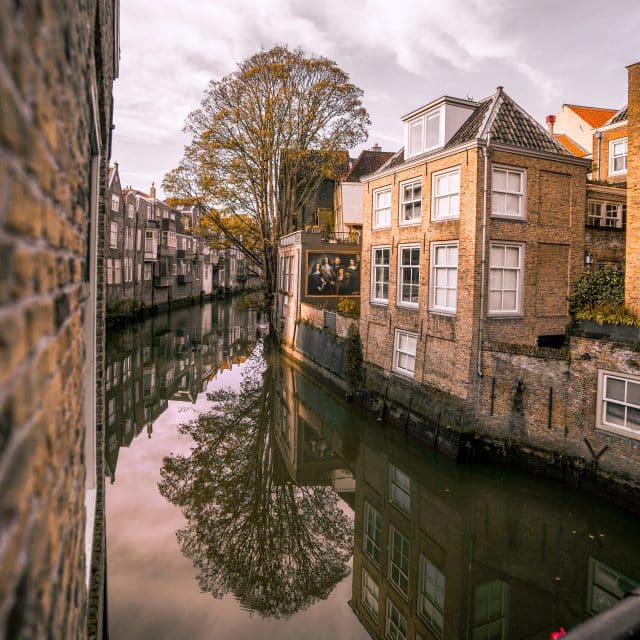 Town Hall Square
From here you have both sides of a beautiful picture. With the City Hall in the back, you can see the painting of the five famous men of Dordrecht. The Canal Guard: brothers Johan and Cornelis de Witt, Ary Scheffer, Aelbert Cuyp and Ferdinand Bol. A Dordrecht quintet of great names immortalized on a wall on the Voorstraathaven. With any luck, a boat will just sail by! 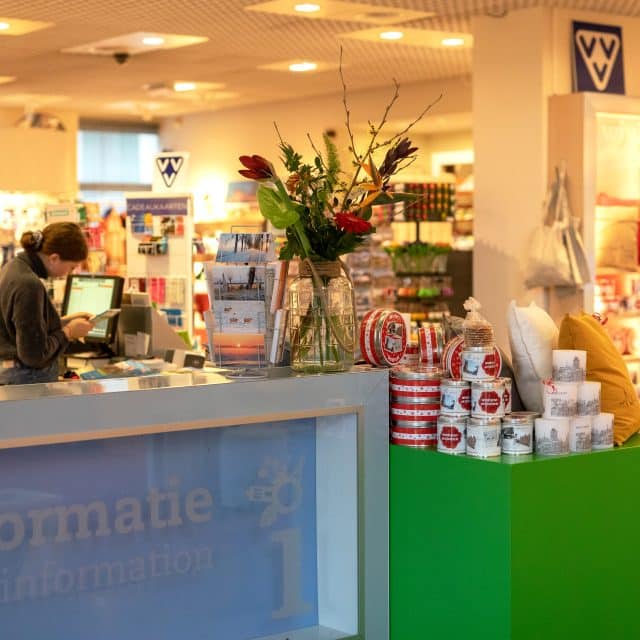 Spuiboulevard 99
This is the end of the route, but of course it doesn't have to be the end of your exploration. With a treasure chest full of new memories, you are ready to (re)discover even more of Dordrecht!
Download 'Treasures of Dordrecht'